Tomb robbing in ancient Egypt played an important part in the economic well-being of the society. Although by today's standards it is considered a dastardly deed, the Egyptians did not view tomb robbing with the same disdain and disgust that modern society does.

Interestingly, many of these tomb robbers were also the ones responsible for the different burial processes of entombment and thus knew exactly which items were contained in which rooms in each tomb. These people included the priests and scribes. Since all mummies were buried with a list of their treasures, robbing the tombs of all their treasures was facilitated. Many of the nobility were guilty of tomb robbing and thought it an acceptable practice. A long-dead relative with whom an individual had been close could provide the perfect tomb and the trappings were already in place.

During times of economic hardship, tombs were sometimes robbed as an act of revenge. Leaders who had departed for the afterlife were supposed to look after those who remained. When that failed to happen, as during periods of economic or social difficulty, tomb robbing was considered just retribution for the dead leader's failure to provide.

All of the pharaohs were considered to be the incarnation of the god Horus. Therefore, when a pharaoh robbed the tomb of an ancestor, it was considered that he was taking his own possessions. Many of the early tombs were robbed by subsequent rulers and reused, even the sarcophagus has been known to be reused. © Surreal Name Given - Statue of Horus

Despite the numerous safety precautions taken to safeguard the tomb, such as trip wires, traps, holes, and decapitation wires, tomb robbing was a thriving part of ancient Egyptian society. Since only the initial robber was considered to be the desecrater, once a tomb had been opened and defiled, further robberies were inconsequential.

Sometimes, tombs were robbed before they were sealed. Many ancient Egyptian tombs have been found with seals and sarcophagi intact but the mummy had been desecrated and its finery removed. This could only have happened prior to burial and therefore must have been done by those who participated in the burial ritual.

Since many of the pharaoh's servants were involved in the burial process, they also knew how the tomb was sealed and how to circumvent any booby traps that might be installed.

Gangs also participated in the tomb robberies. Usually, they were comprised of about ten people and included tradesmen, who would hide treasures in their equipment and carry it from the castle. Many times, robbers were never caught, particularly when nobles or royalty were involved. However, when a tomb robber was nabbed, punishment was harsh and severe. As a crime, robbery was punished by death, which usually meant being burned alive or decapitated and impaled.

This presented a religious problem for the thief because if he was burned, there would be only ashes and no body that was able to enter the afterlife. If he was impaled, his body would forever be tied to the place of his impalement.

Less frequent and less severe punishments included cutting off one or both hands, whipping, beating, and torture. These methods were used both for punishment and for extracting a confession from tomb robbers.

Tombs That Have Been Raided

One of the most famous tombs, that of King Tutankhamen, had been robbed twice prior to its historic opening by Howard Carter early in the 20th century. The outer doorway contained a hole that had been replastered and sealed; this could only have been done by a tomb robber. The first robbers were thought to have been seeking linen, cosmetics, and metal. Although the cosmetics may seem trivial now, in ancient Egypt they were highly treasured and expensive commodities.

The second robbers were thought to have been interested in the pharaoh's jewels and figurines and Carter estimates that about two-thirds of the jewelry was stolen during the second robbery.

King Cheops (also known by the Egyptian name Khufu), who ruled during 2500 BC and is entombed in the Great Pyramid of Giza, was looted in the 19th century by thieves who used explosives to blast through the thick stone doors. 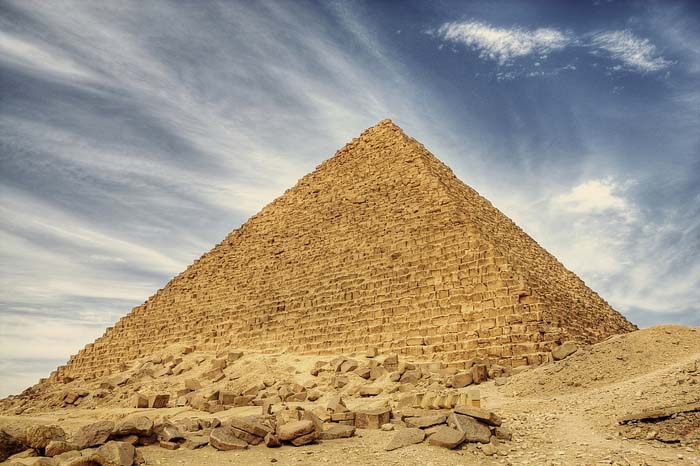 The tomb of Thutmose II was vandalized by tomb robbers and his mummy severely damaged. Thutmose is thought to have been pharaoh during the time of the Biblical exodus of the Jews, which is further suggested by some of the injuries that his body sustained during his lifetime.

Thutmose III also had his tomb and his mummy ravaged by tomb robbers. The damage was so extensive that his wrappings had to be renovated in order to make the mummy firm enough for re-burial.

The tomb of King Tut is estimated to have been robbed for the first time between 1500 and 1300 BC. Items taken during the first ransacking are thought to have included stone jars, gilded wood, razors, bronze arrowheads, and a gilded staple, all of which were from the antechamber.

Apparently, the first set of robbers operated in the annex and antechamber only, while the second group of robbers had access to the entire tomb and took approximately eight hours to loot it. Most of the jewelry was taken as well as several vessels made from precious metals. Curiously, a linen scarf with several rings made of solid gold were left behind. The fate of these robbers, if they were caught, would have been a severe beating on the soles of the feet and subsequent impalement. It's thought that the robbers had to leave hurriedly, thus explaining the easily carried valuables that were left behind.

Tut's tomb was partially restored and then resealed and speculation is that Maya, who restored the tomb of Tuthmosis IV, was responsible. The boxes that were unsealed by the robbers remained unsealed, however, and the shrines that had been compromised were not restored. Holes in the burial chamber and the antechamber were closed and resealed, then stamped with the necropolis seal.