The Art of Ancient Egypt

Much of what the modern world knows about Ancient Egypt can be attributed to Ancient Egyptian art. Everything from knowing what they looked like to what they did for a living, what they held dear and even the clothes they wore are things that have been made possible by viewing and examining the art that they left behind.

The art of ancient Egyptians remained much the same over the course of their 3,000 year rule. To them, it meant something different than what it means to us today. Art was their science, it represented what they believed to be divine truth.

Since the Ancient Egyptians were highly religious people, much of the art they created can be found on temple walls and in tombs in the form of sculptures and paintings. The paintings in tombs were meant to help guide the dead pharaoh into the afterlife. This is known as funerary art and is not only found on temple walls, but also inside tombs on scrolls of papyrus. And in sculptures we see: The ancient Egyptians loved depicting the world around them in their art. But as fond as they were of details, they aimed more for idyllic representations instead of exact copies. They used simple, well defined shapes against areas of smooth color. The six colors they used in their paintings were green, yellow, black, white, blue and red. Each had a different meaning.

Animals and other living organisms were often used as symbols to depict their gods and goddesses. They didn’t believe that, for example, Horus had the head of a falcon, they used it as a symbol to represent that they believed he was full of wisdom. The ancient Egyptians were best known for their pyramids. These impressive and stately works of architecture are not only grand displays of art themselves, they also represent incredible mathematical and technological knowledge. Over 80 pyramids still stand today that are over 3,000 years old.

The Great Pyramid stood as the world’s tallest structure for 4,000 years until the 20th century, and is classified as one of the seven wonders of the ancient world. It was built using two million limestone blocks and was covered with smooth slabs of limestone, an amazing architectural accomplishment.

Click here to read more about The Ancient Egyptian Pyramids Temples are also impressive displays of architecture. Some temples took years to build and were added on to with each successive pharaoh.

Click here to read more about the Temples of Ancient Egypt...

Examples of ancient Egyptian art and crafts still exist today. They have survived the ravages of thousands of years and are prime examples of the dedication craftsmen felt for their art. Unfortunately, items crafted from leather, wood and other perishables have been destroyed. However, some of their jewelry, pottery, carpentry and even glass pieces exist today and remind us of their tremendous skill. The ancient Egyptians revered animals. They often represented certain godly attributes. The animals in ancient Egypt were used both for food and as pets; some were even mummified and given decorated funerals. 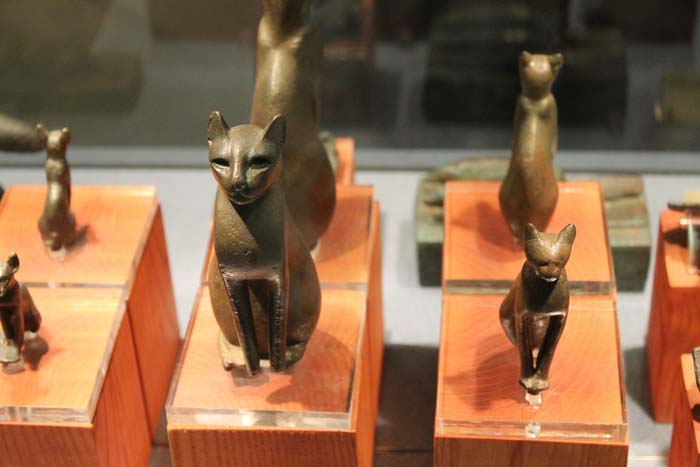 Facts about Art in Ancient Egypt