Most of the Egyptian pyramids were constructed as burial monuments for the Egyptian pharaohs. They were built of enormous stones in varying sizes; inside they contained corridors and chambers that housed many of the items the Egyptians thought the pharaohs would need in the afterlife. Due to the dryness of the desert where they were built, the contents were not subject to decay, mildew, or decomposition.

Size and Construction of the Pyramids

The pyramids were generally very large square structures made of limestone and all of them face due North. The Great Pyramid of Giza was the tallest structure in the world for almost 4,000 years and contains approximately 6 million tons of stone.

The Great Pyramid at Giza is one of the Seven Wonders of the World.

Earlier pyramids have stair-stepped sides but those constructed later have smooth, flat sides. The Great Pyramid at Giza had polished sides made of highly-reflective Tura limestone. When sunlight reflected off it, the Giza pyramid looked like a great shining light. The Great Pyramid at Giza is the only one to have eight sides; all the rest of the pyramids have four sides. 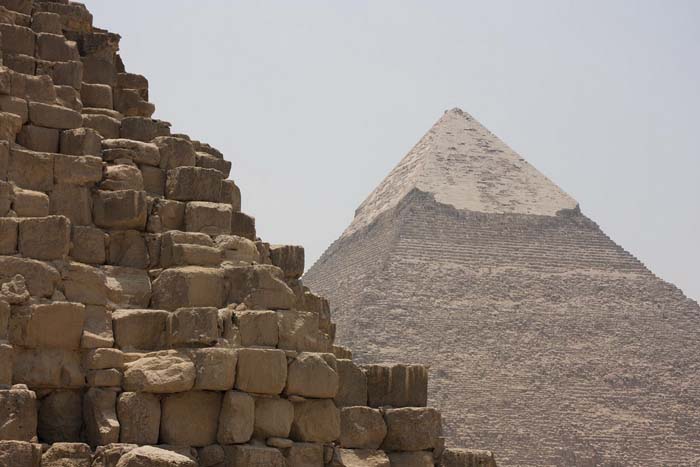 The Great Sphinx of Egypt 'protects' the Egyptian pyramids. With the body of a lion and the head of a man, this structure was intended to keep the burial tombs safe from the effects of angry gods and thieving humans. The pyramid tombs were placed to the left of the Nile River because that was considered to be the land of the dead. Purpose of the Pyramids The Egyptians were a multi-theistic society. That is, they worshiped many gods and believed that the pharaohs were their direct link to the gods. The pharaohs transitioned to gods after they died, thus the attention to the Pharaoh's needs in the afterlife.

Paintings and inscriptions that decorate the interior of the pyramids provide us with information about the lives of the Egyptians. Many of these paintings depict the daily lives of the pharaohs and from them we can learn much about the pharaohs. For example, King Tutankhamen is usually depicted in a seated position. This corroborates findings from his sarcophagus that indicate that King Tut had a club foot, which would have prohibited him from standing for extended periods of time. © Jean-Paul Remy - Paintings from the Tomb of Tutankhamun

Curses and physical traps were place on and in the pyramids in order to protect them and deter thieves and robbers from looting the tomb. However, most of the pyramids have had their treasures looted and are in a considerably worse condition than they were at the time of their construction.